David Western: The changing nature of ecology and conservation in a global age: a view from our savanna birthplace 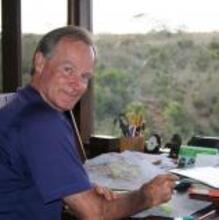 Event Date:
Thursday, March 26, 2015 - 12:00pm to 1:00pm
Location:
Peabody Museum lecture hall See map
Within two centuries we have changed nature around the world from locally distinctive ecosystems to human-dominated landscapes. A half century of human and wildlife studies in the Amboseli ecosystem, Kenya, looks at the changes in our ancestral ecosystem, how we are refashioning nature, and the widening meaning and scope of conservation.
David Western is chairman of the African Conservation Centre, Nairobi. He began research into savannas ecosystems at Amboseli in 1967, looking at the interactions of humans and wildlife. His work, unbroken since then, has served as a barometer of changes in the savannas and a test of conservation solutions based on the coexistence of people and wildlife.
Western directed Wildlife Conservation Society programs internationally, established Kenya’s Wildlife Planning Unit, chaired the African Elephant and Rhino Specialist Group, and was founding president of The International Ecotourism Society, chairman of the Wildlife Clubs of Kenya, director of Kenya Wildlife Service and founder of the African Conservation Centre in Nairobi. He is an adjunct professor in Biology at the University of California, San Diego.
Western’s publications include Conservation for the Twenty-first Century, In the Dust of Kilimanjaro, and Natural Connections: Perspectives in Community-based Conservation.  He served on a government task force redrafting environmental legislation in line with the new Constitution of Kenya 2010 and is chief editor of the upcoming book, Kenya’s Natural Capital: A Biodiversity Atlas. He is presently directing conservation and research projects under the African Conservation Center. Western received the World Ecology Award for 2010 and the 2012 Life-time Achievement Award for Ecotourism.