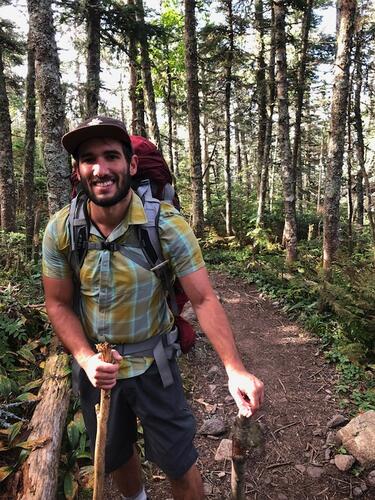 Background: Diego is a Uruguayan biologist currently in the third year of his PhD in the department of Ecology and Evolutionary Biology at Yale. Prior to joining the Jetz lab and BGC Center, he pursued his undergraduate and graduate degrees in Germany, at the University of Trier and University of Konstanz, respectively. His BSc and MSc projects centered around the daily and seasonal activities of Galapagos giant tortoises as well as their ecosystem services, such as seed dispersal. These results have been published in scientific articles, featured in nature documentaries from the BBC, and have recently been covered by a suite of news outlets including EFE and ABC News. After earning his MSc Diego became a Research Assistant at the Max Planck Institute for Animal Behavior in Germany, working on large sets of animal movement data using the Movebank database as well as a suite of animal tracking technologies. Prior to starting his PhD he worked in the Jetz lab for a year as a visiting researcher, and gained experience scaling up his research from examining single species to entire groups and communities. There, he led a project that developed a methodology to incorporate multiple sources of biological information to improve the distribution of species using hummingbirds as a test case. Beyond his PhD research, Diego is interested in scientific communication and environmental justice.

Diego’s research as a PhD student consists of understanding the dynamic responses in which wildlife responds to fine and often sudden environmental and anthropogenic change. This work lies at the intersection of animal ecology, ecological forecasting, and remote sensing.

Research:   His research as a PhD student consists of understanding the dynamic responses in which wildlife responds to fine and often sudden environmental and anthropogenic change. This work lies at the intersection of animal ecology, ecological forecasting, and remote sensing.   While his fieldwork experiences in the Galapagos keep him rooted in the importance of understanding local systems, he is currently exploring how animals respond to extreme events such as El Niño and the ongoing COVID-19 pandemic across the Americas. These studies will provide insights into critical thresholds and tipping points at which animals respond to dramatic environmental and anthropogenic change. Further, he is researching how meteorological data collected by animal tracking technologies, such as temperature and salinity measured by on-board computers, can be incorporated into our weather forecasting system, essentially turning animals into biological buoys measuring environmental change.

At the BGC Center: Besides his PhD projects, Diego is involved in a number of international collaborations led by the BGC Center which lie at the intersection of global change biology and computer science , as well as the monitoring of an entire species group of birds to detect environmental change and inform conservation decisions. Methodological and conceptual advances developed at the BGC Center could be applied to a large number of species, improving our understanding of animal movements and their sensitivity to environmental and human change as well as informing conservation decisions.