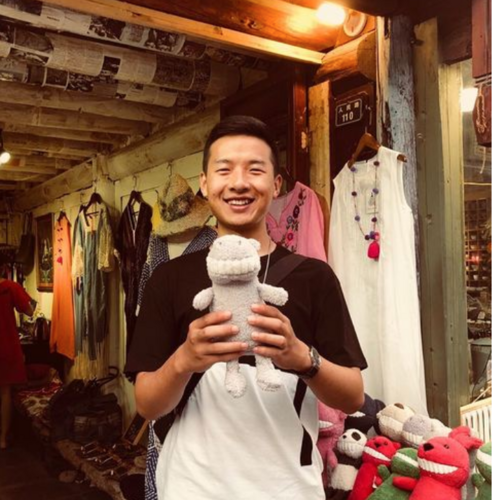 If you ask an ecologist to tell you how they first got interested in the field, most of the time you’ll hear about a childhood memory of being in the great outdoors.
For Muyang Lu, a theoretical ecologist who successfully defended his PhD in the Ecology and Evolutionary Biology Department in October, the story starts with World of Warcraft. “The beginner’s mission for the night elves is called ‘The balance of nature’ which asks you to control the population of nightsabers,” he says of his childhood introduction to the theoretical underpinnings of ecological dynamics.
But the “serious” answer comes from his dissatisfaction with the reductionist paradigms underpinning biochemistry, which he studied as an undergrad. “I was attracted to the ‘holistic’ value of nature and don’t believe that sequencing everything is the way to understand life.” Muyang found himself deeply fascinated by famous ecological theories like MacArthur and Wilson’s Island Biogeography Theory, Hubbell’s Neutral Theory, and John Harte’s Maximum Entropy Theory of Ecology, which connected the dots across ecology in beautifully elegant ways. So, with the influence of an excellent theoretical ecologist, Fangliang He, as a Master’s supervisor, Muyang began his dive into theoretical ecology.
In the fall of 2016, Muyang joined the BGC Center as a PhD student. “I was definitely finding my way as I went along.” In the spirit of following the winding journey of scientific curiosity, Muyang’s academic career took many turns and asked many questions: from interests in latitudinal biodiversity gradients and range size dynamics in the early days, to island biogeography and beta diversity, to eventually finding his thesis chapters in the spatial scaling of environmental niches. But a scientific journey is rarely linear, and Muyang often found himself circling back to past questions.
The guiding question of Muyang’s thesis centered on the quantification of species ecological niches. A niche, broadly defined, is a species’ role in its environment: what and how it eats, how it’s distributed in space and time, and how it interacts with other species in the environment. Muyang’s work investigated how we understand and quantify the species niche, from using the framework of the n-dimensional hypervolume to exploring how niches are modeled across spatial scales. This kind of work equips us with a more thorough understanding of how nature is organized and better tools to predict how species’ niches will change in responses to natural and human forces – which will be the focus of Muyang’s postdoctoral work.
“Theories are the crystallization of human knowledge,” according to Muyang, and part of their beauty is that no equipment or materials are necessary to study them – anyone with a passion for investigating the underpinnings of ecology just has to start with an idea. “You can take your ideas with you anywhere and wait for the chance to work on them!”
This genuine passion for his chosen field is what propelled Muyang through his PhD: a topic that “ignites passion, creativity, and perseverance for its own sake” was vital to his success. Muyang also credits his colleagues for their continued support and the scientific conversations across ecological specialities that sparked new, interesting ideas.
Muyang has accepted a postdoc position at the University College of London’s Center for Biodiversity and Environment Research where he will investigate and predict species’ responses to climate change. True to his passions in cross-scale research, Muyang has ambitions to incorporate both movement and microbial ecology to make work “truly unifying across scales.”